Paris, the city flourished with wandering souls of poets, playwriters, revolutionists, artists, and brilliant cuisiniers – has forever branded her name with keywords like elegant, romantic, etc. As people call it La Ville-Lumière, The City of Lights.

When I first visit Paris, the splendid architectures immediately cached my eyes. The buildings’ height is just perfect, and the color is harmonious. With the prestige opportunity to live in Paris at a relatively young age, I start to wonder, when did the city initiate having this beautiful image in peoples’ minds, and why? I believe one of the reasons must be the architecture.

I decided to follow the tracks of Victor Hugo, I found out that the L’Arc de Triomphe had just appeared on the stage in the era of Les misérable, and the tourists’ favorite Instagram spot Eiffel Tower did not exist in those days. Imagine when Jean Valjean dashed to escape from the police inspector Javert during the early 19th century, the road is very narrow, buildings were high and the golden sunlight were blocked.

Paris has no planning for the architectures in that time of chaos. People could build their houses in whatever style they want. After Révolution Française, the city continues in social instability. For this reason, Napoléon III decided to demolish the old Paris, reform a novel Paris with a complete urban plan designed by the famous Baron Georges-Eugène Haussmann. He reformed the roads of Paris in a radial way, and optimized the buildings design. This is the famous “Transformations de Paris sous le Second Empire”, and today we could see ourselves linked with the history when we walk in Paris’s amiable streets. 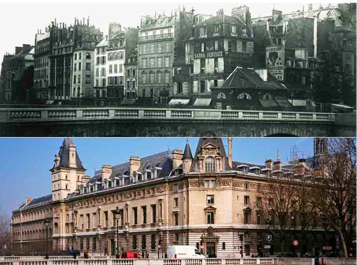 Since the transformation of Paris, the city builds up the image of elegant gradually, which other cities are hard to duplicate. From this I have also learned that how Paris cherished this history since they have kept the design of Baron Haussmann. Every time I strolled through Paris, I would wonder: did my country treat our history in the right way?

Honor de Balzac once said: “Whoever does not visit Paris regularly will never really be elegant.” With the pleasure to live in this hard but beautiful city once in a life time, I would try harder to learn more from the city and also, to be a bit more elegant!