The galette des Rois is a galette traditionally made and eaten in most of France, Quebec, Acadia, Switzerland, Luxembourg, Belgium and Lebanon on the occasion of the Epiphany, a Christian feast that celebrates the visit of the Magi (also called the Three Kings or Wise Men) to the infant Jesus.

The galette des Rois was originally linked to winter solstice celebrations, not to Christianity.

It comes from the Saturnalia of Roman times. During these festivals, at the time of the winter solstice, everybody could seat together and eat at the same table, no matter their social status. A “king of the day” was elected and could give dares to others.

At the end of the 4th century, the Christian Church forbade these pagan festivals but replaced them with a religious celebration. From the 5th century onwards, the Church attached considerable importance to this tradition, which was held on the day of the Epiphany: January 6. The Epiphany (which comes from the Greek “manifestation” or “apparition”) is the day on which we commemorate the visit of the three Wise Men, Baltazar, Melchior and Gaspard, who came to bring 3 gifts to the infant Jesus: myrrh, incense and gold. 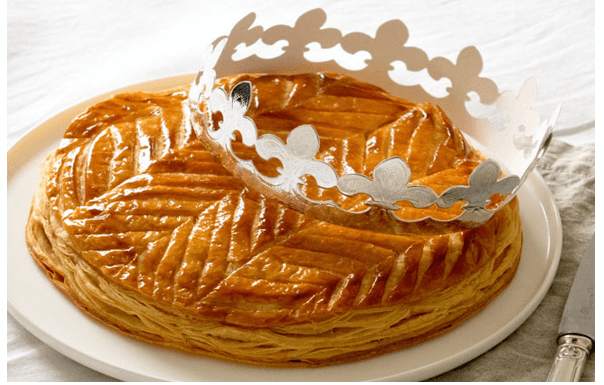 Before being a porcelain charm, people used beans, as a symbol of the winter solstice. The reason is that this vegetable, like the egg, contains an embryo and eventually grows and gives life. The bean was especially important for the Greeks – they contained the souls of the dead according to the Pythagoreans – and the Romans.

With time, the bean has been replaced by porcelain charms in shape of dolls or babies, still as a sign of fecundity. This was followed by symbols of luck or animals.

Today anything can be a charm: Disney characters, music instruments or even Smurfs!

The custom of sharing is ancient; however, the pastry changes according to the region and the country. In Denmark, for example, an almond is hidden in boiled rice. In France, each region has its cake: “gâteau des Rois” in Provence, Aquitaine, and Languedoc; “galette des Rois” in Ile-de-France; and “Dreykönigskuchen” in Alsace. Some are filled with frangipane, but others are brioche, orange blossom, or even dried fruit.

Nevertheless, the most famous recipe of the galette is with frangipane. It comes from Marie de Medici, the second wife of Henry IV. In 1600, when she left Italy to marry the French King, she was given a recipe for a cream with almond powder, prepared by the cook of her closest suitor, Count Frangipani. The recipe was then adopted by the Court of France. 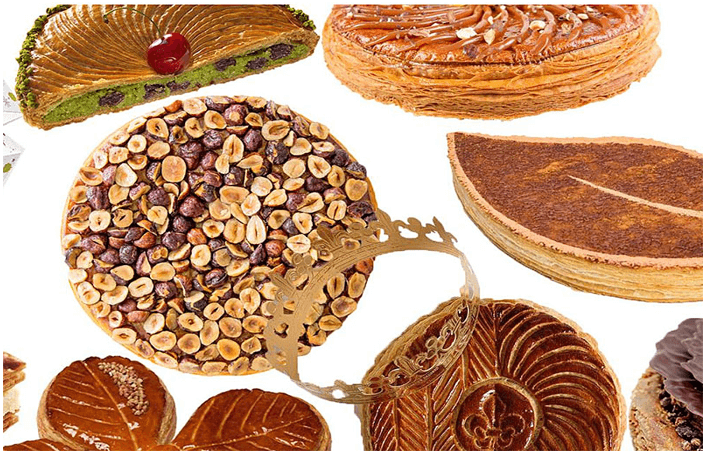 Whether one prefers the frangipane galette or the brioche crown with candied fruit, January is the month of the galette des Rois.

Which one is your favorite?