Some may know him as one of the finalists of the LVMH Prize, while others for the incredible fashion show staged inside the Marc Jacobs store on the Upper East Side in February 2019. The rest have just an issue with everything colourful and fluffy and found him on Instagram by chance even before he appeared on the global stage. Or, maybe, you do not know about him and this is a good opportunity to discover this fashion designer. 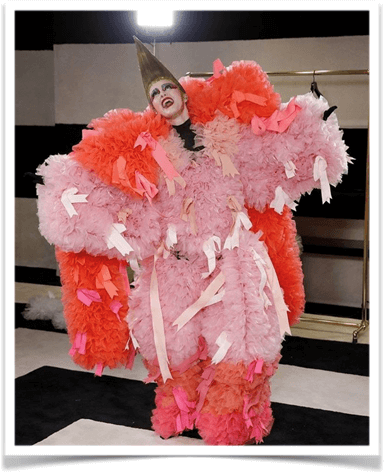 Tomotaka Koizumi is a Japanese designer, and he is almost 32 years old. His brand was launched in 2011 when he was still a student at the National Chiba University. Such a move could have been interpreted as unconscious or extremely enterprising, if it were not for all that Koizumi wants to do is “bring joy”. That is why I decided to tell his story made of colours and ruffles during these boring days locked at home. His studio is a tiny room in his sister’s apartment in Tokyo, and it is there that the magic happens: alone he prepares the designs and sews the garments. How comes that this almost unknown designer did an amazing fashion show in Marc Jacobs store during NY fashion week? Even for him, it is unbelievable.

Instagram played a key role in this story; it has been like the fairy leading Love Magazine’s Katie Grand (British stylist and fashion journalist) to the Japanese designer. One day she was scrolling on Instagram and found herself on Koizumi’s profile. It was done. She fell in love with his dreamy designs. And for a dreamy designer, which location is better than New York, known as the city of dreams?

Katie called Koizumi three weeks before the show, and in three days, he sewed half of his collection and left Tokyo to New York with three boxes. For the show some big names of fashion industry were involved, such as Guido Palau to do hair, Pat McGrath for the make-up looks, Marc Jacobs to set the show in his Madison Avenue store and Anita Bitton to organise the casting (that included nothing less than Bella Hadid and Emily Ratajkowski). But in few minutes, Koizumi has become a face known throughout the fashion world and a creator of sewed optimism. 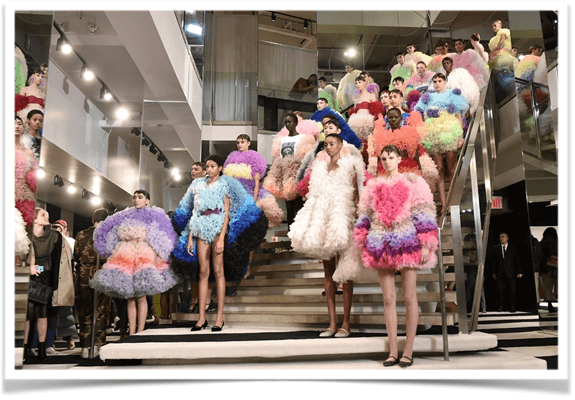 What about his designs? They should be prêt-á-porter, but a glance is enough to understand that this is certainly not something commercial. You certainly cannot wear them to take the metro or to go to work light-heartedly. They are made of hundred meters of ruffled Japanese polyester organza.  Even if they are dresses, bodysuits or something else, all you can see are colourful clouds or, like Steff Yotka of Vogue America said, cake frosting.

From New York Fashion Week, Koizumi’s career took off, and his designs were worn by celebrities and appeared in many different events like the MET Gala by Nichapat Suphap. Besides, two of his dresses were selected in the Metropolitan Museum of Art’s “Camp: Notes on Fashion” in 2019. 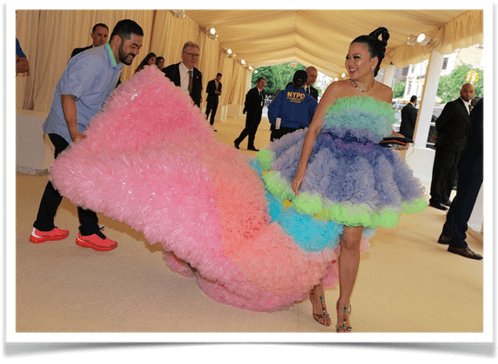 However, what should really be admired of Tomo Koizumi is not the luck (even if I would love to have half of his) but his approach to life. He is ready to accept defeats, but when he speaks about them, he smiles. Looking at his designs, the first reaction probably is “What am I looking at?”, but by searching deeper, you can understand more and more. First of all, he is strongly inspired by Japanese culture… even if you have to push aside tons of organza to find it influenced by the originality and desire of this man to communicate his vision of fashion. For him, his dresses are not just something to wear, but his way of changing the rules and escaping the ties of industry (and society, if we also want).

Tomo Koizumi’s dresses are created to make the world a better place. Nowadays in the fashion industry, we are used to thinking of doing that with sustainability and respecting more the environment. But Koizumi’s way is a different and new one, and his weapon is the creativity that generates endless possibilities and can open up a bright future.

So, as you can see, there is far more behind these fluffy and manga-style designs, and we just have to wait to discover which new ways will Tomo Koizumi find to make us happy.